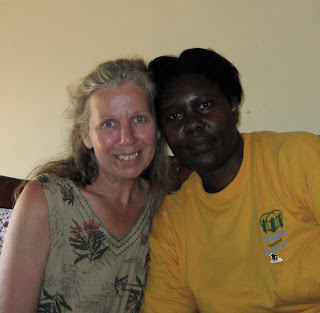 Recently, I was delighted to spend time in conversation with 2 single mother’s here at the village in which I am staying. We openly discussed many issues surrounding HIV/AIDS, orphan children, traditional charity organizations, some local women’s issues as well as a few local men’s attitudes. Here are some of my notes…

Both women, educated, independent and articulate, spoke of choosing to be single mother’s as a way to manage their personal health and well being when education about HIV/AIDS informed them years ago how the disease is spread. At that time their husbands, both used to having many women as sexual partners, desired to maintain their lifestyle for status and other reasons despite being made aware of how the virus is spread. As a result, the women chose to become single to avoid the possibility of becoming infected. I understand from both women that they are ultimately very satisfied with their decision these years later, as, among personal benefits including their resulting autonomy and empowerment, they are healthy and here to care for their children, while their former husband’s, the children’s fathers, have both died due to HIV/AIDS in the years between. 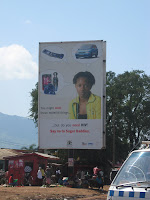 We discussed the estimated number of orphan children and child headed households here in Uganda due to HIV/AIDS and both women assured me actual numbers far exceed the current UN stat of 1,000,000 and continue to grow daily. They said that although ARV’s ( ‘anti retro-virals’, the drugs used to help manage HIV/AIDS) are effectively helping some people here to live positively with HIV/AIDS, treatment is not widely available +/or distributed and many youths and adults continue to die as a result of contacting HIV/AIDS. A lack of educational and medical intervention is leaving a continually and rapidly growing number of children without parents. 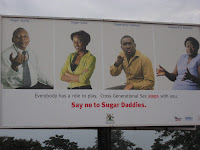 The topic of ‘charity’ and ‘aid’ surfaced and a few western and religious based NGO’s along with their work here in Africa were discussed. The women noted ( without judging history or the original intention of many org’s ) by observing here and now one can see a generation or 2 ( or more ) of dependency exists in certain areas and among certain groups who have been conditioned by circumstance to understand that they NEED traditional charity and aid to survive. Many know of no other option or possible reality. It could be said that in numerous cases an on-going, self-perpetuating kind of co-dependent relationship of ‘supply and demand’ regarding aid has been created and fueled over many years and along with other issues, it is this relationship, the ladies suggest, that currently seeks transformation. We agreed that it can be observed that Africa is in a time of great change and how included in reaching out to developed wealthy countries for help today, is the hope for assistance and education that will serve to empower and lead to self-determination, self-sufficiency and self-sustainability. I found this totally consistent with the main message of many of the African speakers whose lectures and presentations I attended on the topic of Africa awareness over last winter in Vancouver. I shared with the women that my personal attitude/approach is in keeping with this perspective of supporting transformation and it is what I have brought along with me to Africa. They expressed support for me as I move forward daily, learning about and being open to discovering ways and means to assist the orphan children, keeping their self-empowerment and self-determination first and foremost in my intention.

We discussed how the application of ‘fair trade’ creates win-win situations for all involved, and how when we as consumers take active responsibility to educate ourselves about the products we consider buying ( as in , Where they are from? Who has made them? Were the growers, workers, artists, crafts people etc. paid fairly for their goods and services? Who is profiting by our purchase? And is that profit ‘fairly’ distributed? ) and then choose ‘fair products’ when possible as well as advocate for them when they are not available, we can actively play a huge part in promoting the flow of integrity and the uplifting of conditions and circumstances…

Perhaps you can sense how excited and honored I was to have been given the opportunity to share with these women openly and honestly ‘in a little village somewhere in Uganda, Africa!’ Our time together, cut short only by the daily rain that was starting, served to enrich our collective understanding that, indeed, we are ALL very connected, we are ALL ONE, and that while lots is happening around the world that can cause us all to pause, we can observe, former ‘old world ways’ are currently birthing into refined and uplifted ways that are basing themselves in integrity, mutual respect and ultimately, Love! 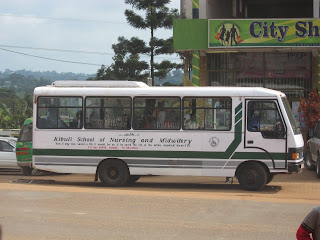 Ps…You may be hearing about rivers rising and flooding due to heavy rains, forcing people in eastern Uganda to move to higher ground. Wishing to let you know that while I am not in that area and do not plan to be in the next few weeks, we are keeping the people who are affected in our thoughts and prayers.

Pss…You may commute each day and experience traffic jams at times…well, here’s a story for you! The other day, my hostess and I were returning by taxi from Kampala to the village. We ran into a traffic jam like none I had seen or been in before! As we tried to travel down the dirt road we were on, at times there were 3 lanes of vehicle traffic going west, with 1 going east, and then up the road that would change to 3 going east and 1 west….over and over this happened…the resulting grid lock was very intense and for long periods we moved not even an inch! It took us almost 7 hours to go 25K!
I was amused and delighted to observe that the locals had great fun with it, laughing, turning up their radios, leaning out their windows, sharing stories…it was all good…
going with the flow…or not!