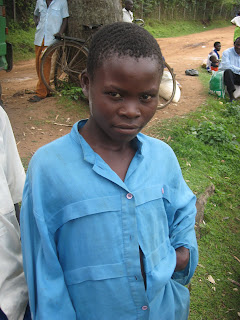 After a few hours of waiting for everyone to be ready, a team of 3 Doctor’s, a PR Coordinator and 2 of us volunteers piled into a Land Cruiser and took off from the NGO center around noon today. We were destined for a community about an hour away, somewhere very close to the Kenyan border. I was told we were going to do outreach in a town called Magale and that there would be around 150 people coming from surrounding communities and villages to a central location where the NGO visits once a month to provide a variety of services for HIV/AIDS clients.

When we arrived there were a few hundred men, women and children of all ages, divided up in very casual but nonetheless organized fashion. Some were sitting on the grass awaiting a meeting with a counselor; others were in shade under a huge tree awaiting their name to be called; a group were sitting on the front steps of a building awaiting their monthly supply of ART’s; there were crowds at the 2 entrances of one building awaiting a visit with a Doctor. In a large open field there were many small groups gathered around brown bags and boxes that were stamped with ‘USA – Not To Be Sold Or Exchanged’ on them. The boxes contained 4 x 4 Ltr jugs of ‘Refined Vegetable Oil – Vitamin A Fortified’ . Every 55 Lb bag, some marked ‘USA Corn Meal’ some ‘USA Soya Meal’ was being opened and blended on site to produce ‘CSB’ (corn soya blend). I realized that I was right in the middle of food distribution to people on ART’s who are presently too weak and sick to provide food for themselves and their families. 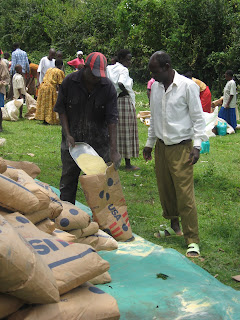 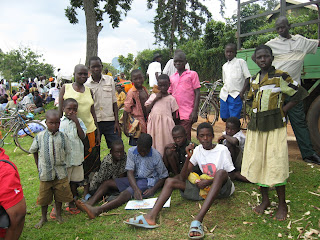 While I and the other muzungu volunteer sat watching for a time, children started to gather round us, behind us, looking curious, wanting to say hello, often too shy to hold eye contact for longer than a second. Finally, I turned around and slowly approached a group of boys sitting on the grass. I crouched down, extended my hand a little and said ‘Hello, my name is Catherine’. They immediately burst into big time laughter… and so did I! We tried to communicate, laughing together more than saying any words, but of course, laughing together IS saying lots! I remembered that I had my laminated ‘world map’ with me so I got it out and a whole group of children and I sat on the grass and figured out where Uganda and Canada are! It was great fun! 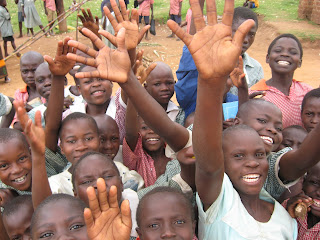 The day progressed and at one point I was introduced to an employee of the NGO who started to share with me his story. Diagnosed HIV positive several years ago when his weight had fallen to below 40kg and his CD4 count was below 50 ( as I understand it, a CD4 count is obtained from a blood test and shows the amount of a certain white blood cell that is present in ones blood…a healthy CD4 count is 1200 per micro-litre of blood ) he joined the NGO as a client and started ART’s. Year by year since then, he has gradually increased in weight and overall health to be at the point he is at today, fully functioning, strong and healthy, living positively with HIV/AIDS and helping others who are in his former condition. 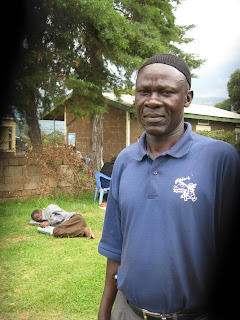 As he finished his story and I was congratulating him on his very Blessed and wonderful recovery he pointed to someone behind me and said…’Once, I used to look like him’. I turned around to see a man extremely fragile and weak, sitting on the ground. Watching for a few moments I could see he was deeply sunken into himself, his Spirit seemingly very far away from where his body sat on the grass. My new friend and I approached the man, I knelt down and extended my hand to him. By now, he was lying down in a fetal position. He looked up at me and reached his frail hand out toward me. I took it and held it between my two hands said hello and told him my name. He looked directly in my eyes and slowly, carefully he said ‘Thank you for being here, for taking time to be with me’. I’m quite sure I gasped a breath. In that second, he was using his vanishing energy to thank ME…

How do I write what that felt like? Where are the words to describe that moment?

I told him I Loved him, I told him he is so very special and I, We, are praying for him… We are asking for him to have all the Love, help and care that he needs. Again, he thanked me, he said it was encouraging for him. I repeated ‘I Love You’ and then moved away to allow others who were coming to care for him get close. I learned later that this man, 38 years old, weighed in at 28kg today with a CD4 count of 22.

I went back to the truck to sit quietly for a few minutes. Coming towards me I saw a man with a little girl in a pretty white dress who I had taken a picture for earlier in the day. Together they climbed up through the back doors onto the seat where I was, he picked the little one up and put her on his lap. He said to me ‘I have heard that you met my granddaughter today. She is a good girl, I am asking you to take her with you’. 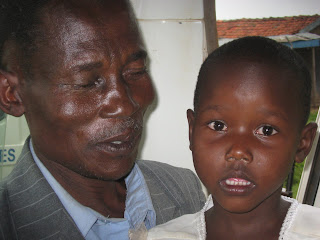 In a heartbeat I felt inspired and said ‘I can see how she Loves you and how you Love her. You are family for each other and she is meant to be with you’. Hugging her closely he said ‘Yes, she does Love me and I do Love her. Thank you’. We took another picture, I showed it to them and we said goodbye.

As we bounced and swerved our way home a little while later, scenes from the day played over in me. I felt once again a sense of weakness that had washed over me a few times during the day and I questioned my fortitude. I remembered an interview I once saw with Bono. I may have the details somewhat wrong but I think he was being asked something about when he knew he would become involved with helping to uplift the people of Africa and he had replied something like…’it was when a man leaned forward out of a crowd holding his child out to me and said please take her, please give her a life’.

Tonight, among other things, I come to terms with the fact that I now understand a little more about what that means…

Yes, a big day… Thank you for keeping our dying friend, an innocent little girl, her grandfather and me in your heart!

PS…After waking from a restful sleep feeling Peace and Joy in my heart today, I post the message above from yesterday. 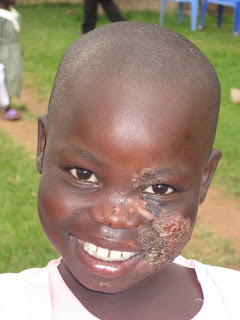