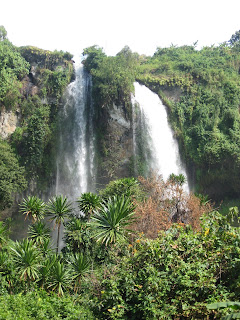 Last posting I had met Morning…I was praying for help to know what to do, AND, to do it!

Well, Spirit moved me to take to the mountains on my own for regeneration and solitude…so I planned a guided solo visit to beautiful Sipi Falls in the foothills of Mt. Elgon!

Regenerate I did! I share the Light and Love that I received at the falls with you here! 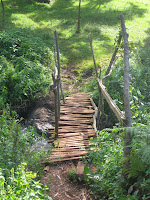 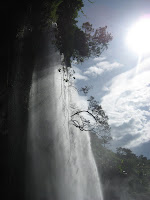 I hope you enjoy your visit to ‘Kapsep’, a ‘peaceful place’. Joseph, my guide said ‘Sipi’ is an English word. He explained that when European explorers ‘discovered’ this area, there was a clan living alongside the water. When asked their name with the intention of naming the falls the same, they apparently replied ‘Kapsep’ which somehow turned into Sipi! 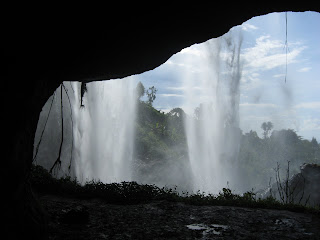 A couple weeks ago I visited the Falls area for the first time with several others. We took a trail to ‘Upper Sipi Falls’. The path led over an ‘Indiana Jones-like’ bridge across a river, around a hill to the side of the falls and then right into the back of them…a spectacular and wonderfully enriching perspective indeed, to be in a cave looking out from behind the powerful water as it is falling past! 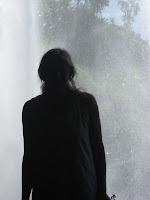 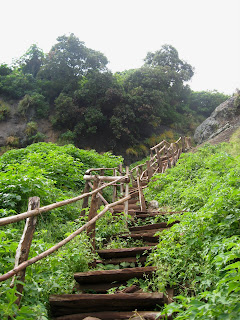 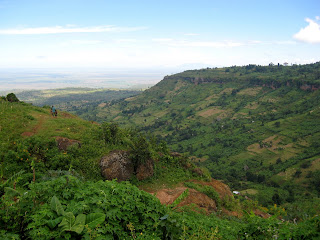 On my most recent visit Joseph guided me to a different area of the falls, a lower level that can be seen from far away across a valley of green. We descended 2 of the greatest flights of steps I’ve ever been on into the valley that looked and felt like a dream. We wound our way around a few hills, through plantations and fields of coffee, bananas, cassava, corn, beans, peas, pumpkins, onions, carrots and cabbage; over a couple streams and some ‘safari ant’s’ relocating their young; arriving at a very dramatic, awe inspiring viewpoint across from the long falls, perched on the slippery side of the basin they plummet into. On our return walk, the heaven’s opened and poured huge, very noisy raindrops upon us and every thing. It was fantastic! Soaking wet, we took shelter in a small cabin for a time and I learned a little about the origin and customs of Joseph’s people. 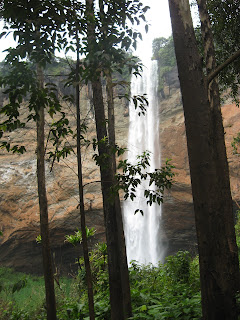 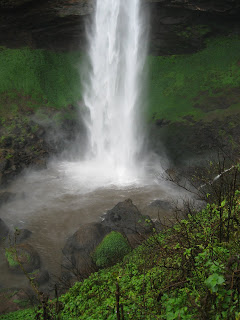 The Sabinye People originated in the Ethiopian highlands many centuries ago. Joseph explained that the Sabinye People arose from under the umbrella of the Kalingin People who also included the Nandi, Sabout, Kipsegiese and Masai.( Warning! Do not ‘use me’ for reference…I was interpreting…there is every likelihood that I have spelled just about every one of these names incorrectly and even gotten a few of the details backwards…! ) So… originally being nomadic pastoralists the Sabinye moseyed along with their animals looking for pasture and water. Leaving the Ethiopian highlands they eventually arrived in the Trukana highlands in Kenya. Because of internal conflict with the Trukana People, the Sabinye moved on and eventually settled on the slopes of Mt. Elgon. Originally living in caves, they depended on hunting antelope and water buffalo. Eventually they lived under thick trees and then in small huts called manatas made of mud and cow dung, next in mud and grass huts and on to the iron sheet homes we can see today. 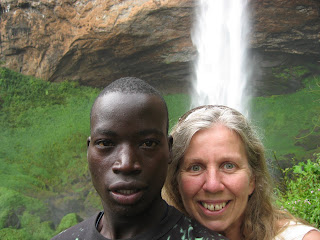 Joseph further explained that the Sabinye culture is based around rituals, primarily a ‘coming of age’ ritual during which teens are circumcised. The ritual marks the end of childhood and proves their courage and strength as adults. The ritual takes place only in the even years…so, not this year…

( Sidebar re: circumcision…Female: I am told that although the Ugandan government has outlawed female circumcision there are clans who continue to perform it secretly. Male: In studies it has been shown that male circumcision can reduce the spread of HIV in men if the procedure is done in a sterile and controlled setting such as a hospital. Circumcision performed during a ritual in a village setting can actually promote the spread of HIV as traditionally one instrument can be used consecutively on several participants during the ritual. ) 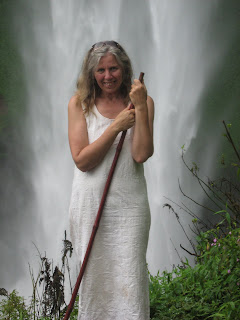 The rain moved on and the sun came out. Joseph and I left the little cabin and headed back around the mountainside. Run off orange water poured over the side hills in mini waterfalls creating fantastically colored rushing streams, everything glowed and glistened, the children re-emerged…it was remarkably beautiful and all together a most healing time spent in the heavenly garden!

Thank You Spirit! Thank You Kapsep! Thank you Joseph! 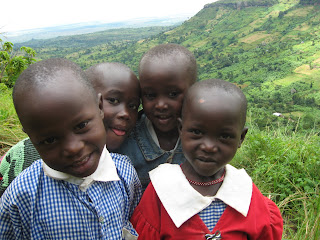 I am good to go again! Love you, Cath 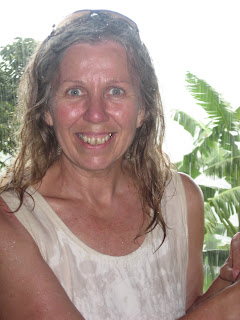 Gift a Basket! Receive a Basket!

Handwoven by a Women’s Empowerment Group

For a minimum donation of $100 we will mail your basket to you, or to the special person of your choice, today!

Thank you for your kind support!