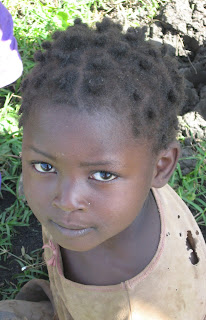 Another great week … the website ‘Projects’ page was updated, I rec’d messages of Love and encouragement from family/friends back home (thank you!), I finalized the purchase of 100 excellent quality mosquito nets at a great price and gave the first one away to a special little 3 year old HIV+ Angel (thank you to those who helped facilitate the purchase, we’ll soon be in touch with you directly to share more details…), I worked with the Skills Development group and learned all about raising poultry as an income generating activity, spent a whole day in a field with the ACIO group, and today, visited infants in the malnutrition ward at the hospital. 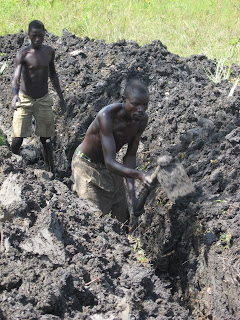 On Thursday, I was asked by Vincent of ACIO ( see ‘ACIO Child Care Center, Sironko’ on the ‘Projects’ page) to make a visit to the land where members were getting together to work on digging some drainage ditches. What a great day! Perhaps 50 people were there, mostly women and thankfully some very strong guys too. The ditches that needed to be dug by hand had to be about 3 feet deep by a couple feet wide, spanning the perimeter of an acre of pretty wet (…heavy soil) land. What a fantastic, very special community effort! 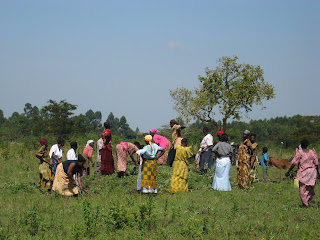 Lots of people had brought along a digging tool, the ladies (many in ‘gomesi’, traditional dresses women wear, shown in the photos having pointy shoulders) started on removing stumps and breaking apart huge termite hills within the interior, while the men started on the perimeter of the property. A group of about 6 women got together under a tree, started a small fire and began to prepare posho (maize flour cooked in salted boiling water, creating a very thick porridge) and thinly sliced cabbage sautéed with tomatoes. I spent some time with the ladies talking about the food they were preparing, children, the local language of Lugishu and eventually, brought out the laminated world map I carry with me everywhere. We discussed the location of Uganda, Africa, Canada, the US and UK, the equator and climate/crop differences between our 2 countries. I explained how I had flown in 2 different airplanes taking 2 nights to get here, I rolled the map into a globe shape and showed them how when it is day time here in Uganda it is night where my family are…they were amazed to learn this and said some of them had wondered if it was the earth that was turning every day or it if was the sun that was moving around the earth. 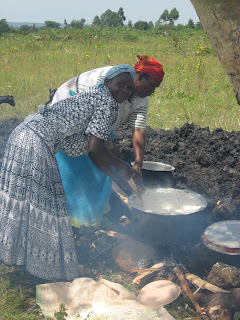 After some time the other women who had been digging sat down to take a break in the shade of a large tree. They called me over and placed some cardboard on the ground in the middle of them all for me to sit on. We communed. One woman started playing with my hair (this has happened a number of times now) and although my hair feels about as dry as it could be to me (the sun being so hot and getting hotter these days), to her and to several others who touched it, my hair felt very soft. They laughed at how quickly a braid without a tie at the end came out when in such contrast they can twist a portion of their hair between 2 fingers and it’ll stay like that all day and longer. It was a great visit, we laughed, had many an understanding moment, felt very close with one another. Soon it was time to eat and the ladies who had cooked brought over several bowls of food for the large group of us under the tree. Everyone washed hands with water from a jerry can. We shared Gratitude for the food. A photo ‘had’ to be taken so Vincent did the honors. As he figured out how to work my camera, the lady behind me started to fix my hair and I noticed how many of the women were reaching out to touch me for the shot…I wished I had more appendages, I wished I could physically touch them all too because these women were so lovely to be with… enthusiastic, warm, open, welcoming, very present and awake, happy and genuine, strong and caring, many of them young widowed mothers, some HIV+, some grandmothers, all caregivers of orphan children, all stakeholders in the child care center that will one day be built on the land where we were sitting. Vincent took a picture I am treasuring because of the connection we were feeling at that moment and the joy that is showing on so many faces (…it is interesting, most people really want their picture taken, they are quick to ask for one, and when the camera is ready to shoot they put on the most serious facial expression…a local has told me he thinks it is because people are cautious of appearing or being judged ‘undignified’). We went on to enjoy eating by hand, sharing from the communal bowls. (So…how long will it take you to spot the muzungu in this picture? I know, I know…where I was placed didn’t much hinder your search…!) 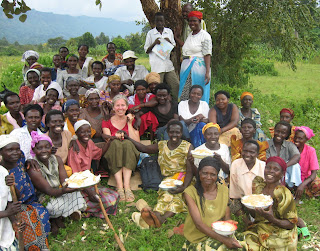 There were many moments at the ‘field of dreams’ that I will not forget… a couple really stand out. A group of children had gathered while I was visiting with the women who were preparing food. After we had looked at the map together I called the children over, we had a photo and then we all sat on the ground and had a visit. A woman interpreted for us. Some of these children, I was told, were seeing a white person for the first time. One little boy, maybe 2 years old, never did get past his fear…but he did bring laughter to us all a few times when he would come a little close and then, when I looked at him, would take off running fast as he could, his little naked bottom jiggling as he made great haste half way across the acre! I was telling the little ones about children back home, about how many of them are light skinned like me and have light eyes…they stared at my eyes, touched my hands and arms…I was saying that we may look different yet we are all the same, we are all one in our hearts. ‘Children in Canada and all around the world like to play and run and laugh and learn new things just like you!’ I was noticing how the woman interpreting sounded so enthusiastic to mention what I was saying to the children and I could see smiles of agreement and a knowingness on the other women’s faces…it was a warm moment that expanded in me…seeing these people was seeing oneness…being with them was being in oneness… simply living/living simply…seeing inside the moment, a beaming reflection of authentic community, wealth and power…here was Love and everything was crystal clear. I looked up to see all these faces smiling at me…wow…exquisite …thank you. 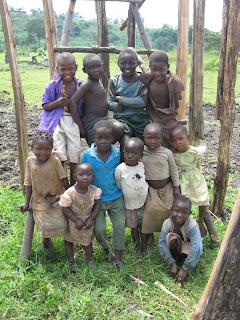 After we had all eaten and the fire was put out, pots and dishes loaded atop a few women’s heads for transport and young ones wrapped onto backs, the group gathered once more to have a few words and make their next plans. After some conversation and a prayer in Lugishu they stood quietly for a few moments. No one moved. I don’t even think birds flew, or bees buzzed. Everything just stopped. It seemed all was joined in a most powerful moment of intention, a collective silence, the loudest one I may have ever heard. And then, everything being complete, goodbyes were shared, ‘safe journey’ was called out over and over and everyone set off in their various directions, some with hours of walking laying ahead before reaching their villages by night fall. 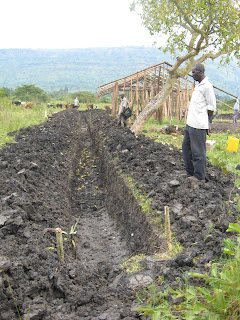 PS…In these 2 photos you can see framing for the temporary building ACIO members are currently putting up to house some of the orphan children while we work on bringing more permanent structures into reality! This structure is using hand hewn muvule tree trunks (in 2ft deep holes in the ground with soil pounded around the pole to hold it in place), smaller tree trunks for trusses and will have mud walls and iron sheet roofing. Nails cost about $4 per kilo, 30 gauge 3x10ft iron sheets are about $9 each. So far ‘Love is the Answer’ has contributed 100,000Ush to purchase 7 of the 70 iron sheets needed for the roof and 50,000Ush towards feeding people on the community building days 🙂 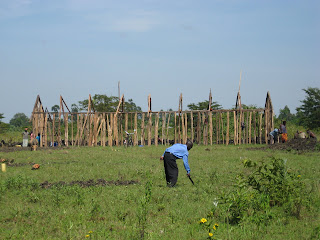 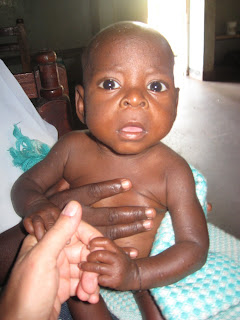 This is Sebi, he is 3 months old. I sat with him and his Mom today in the ward at the hospital in Mbale where he is recovering from a very near death experience brought on by malnutrition. His Mom, HIV+, is a client at the NGO. She was in the center a few weeks ago visiting with her counselor who, after making inquiry with the client about her child, decided she should do a home visit to check on the baby. When she arrived at the home she found Sebi desperately ill, his body completely swollen. She immediately had him brought in to the hospital. It was found that he was starving to death; he has TB, and is HIV+. Treatment was started and little Sebi has made quite a miraculous recovery in a very short period of time. Today while visiting, the counselor said as recent as last week he could not raise his arms, so she was sure delighted to see that he was reaching for me and my hand as I tried to take a picture of him for her files. It’s pretty clear that this sweet young counselor, maybe 20ish herself, helped to save this little one’s life. She said she cried for 2 days after discovering baby in such a state a couple weeks ago. Today, in balance, was a very good day for her and little Sebi too. 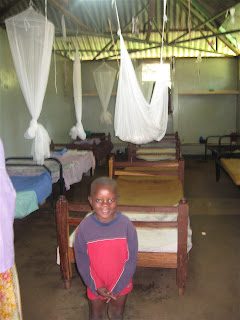 This is Sebi’s older brother who is also staying at the hospital with his Mom and brother. There is no one to take care of him if he were to stay home. While Sebi recovers, his brother receives attention as well and Mom can learn about proper nutrition and care for her children. Here, big brother is proudly showing us what a hospital room looks like. It is quiet on the ward today, there are ‘only 8 children today… last week there were 17, many of whom have recovered and gone home’. 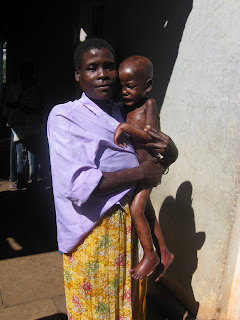 Here is another child I met today, taking longer to recover than Sebi. This little girl is 3 years old, very weak and outside of herself. Returning from bathing the child, who was dripping wet and whimpering when we met, Mom wanted to pose with her for a photo. After taking the picture I stood with them, compelled to speak softly to the little one and to rub her back between her shoulder blades as gently as I could manage. Literally within seconds she calmed, tucked in and fell to sleep in her Mother’s arms. Amen. 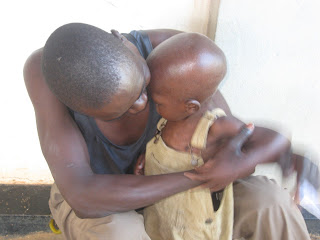 As the counselor and I were leaving the malnutrition ward these two caught my eye…the man, the Dad of this little patient was head to head with his son, gently speaking to the little one; the boy, perhaps afraid or maybe just feeling lousy was hiding in the safety of his Dad’s arms. I found myself wanting to take a picture of them both in that moment, not understanding why they had captured my attention. Then I realized…this is the first time since I have been in Uganda that I have seen a man loving his sick child. How beautiful is that!

With Much Gratitude and Love,
Catherine