Source Of The Nile! 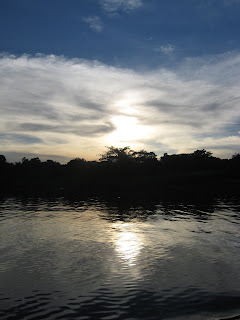 I have just returned from a couple days in Jinja, a town some 150K SW of Mbale. Sitting on the beautiful shores of Lake Victoria and considered by some to be at ‘The Source Of The River Nile’ (… both Burundi and Rwanda also claim ‘the source’ …) Jinja attracts a great number of muzungu tourists, volunteers and business people. Reading my travel book I learned that Jinja has large Indian and Asian communities ( many Asians who left during the Amin years have now returned ) and because of it’s tremendous wealth and power throughout many years, it was spared destruction during the civil war. There is a street overlooking the beginning of the River Nile as it branches off from Lake Victoria that is lined with huge mansions and is opposite a golf course…yes, a 9 hole! I noticed a few locals there, not playing, but rather resting on the grass in the shade of the huge trees that line the fairways…! Fore! Quite a change from where I have been so far… 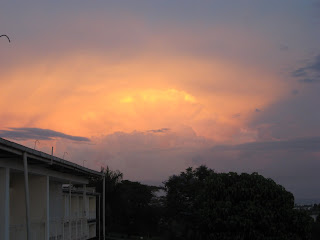 I stayed in a hotel on the shores of Lake Victoria, the scenery from my balcony very beautiful, the 360 degree sunset on the evening of my arrival absolutely stunning! While in the dining room and the lobby I had this recurring feeling of being a British Aristocrat in, say, the early to mid 1900’s…THAT was quite interesting! 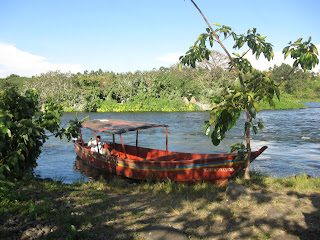 I arrived at the hotel in the afternoon and was very quickly whisked off for a boat ride to visit the spot where the River Nile begins. After checking out the captain and sensing I’d be ok I boarded a boat that had ‘Ugandan Prisons’? painted on the side… 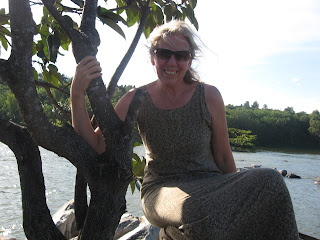 I felt a bit like a runaway explorer especially as we glided up on to the rocky shore of a small island and I climbed the concrete monument there that marks the spot…’Land ho…and all that! How brilliant! I do believe this is exactly where the River Nile begins…!’

Some Jinja observations…
I saw many whites in Jinja, but I found that most of them didn’t want to have any eye contact or conversation. I was wondering about it and brought it up with a Mennonite man from the US who shared my table in a restaurant. Although I had noticed ‘trekkers and business men’ types, I was sensing that most visitors were in Jinja for humanitarian reasons. I asked the gentleman if this was the case and if so then ‘Where, could he tell me, was the Love…?’ He said yes, most visitors are there for humanitarian reasons and he explained that during his several years experience in the area he has found that ‘sticking to oneself’ has something to do with the fact that most whites in Jinja are with ‘faith based’ orgs from the west. They can be reluctant to mix with each other because they may not be from the same faith and can be seen as challengers to each other! Wow ~ Interesting and educational for me…I had not encountered this particular kind of ‘competition in the workplace’ before! 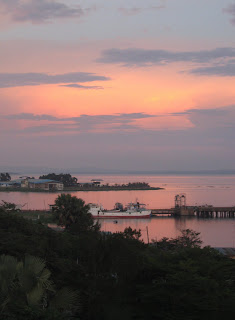 There is great western food in Jinja…Imagine, during my stay I enjoyed an iced latte, a chicken wrap, spanish omelet, and wow…penne with spicy ham in a cream sauce and a side salad! Yummy! 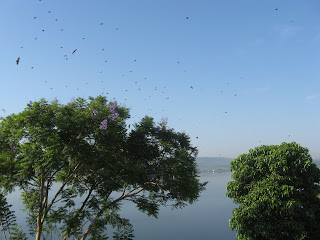 Directly outside my balcony, bats put on quite a show and right on Hallowe’en too! How absolutely ‘scary’ and fun!!! (Native Medicine…Bats signify ’Death and Rebirth’…everything fits perfectly!) There was a specific type of palm tree by the water and a few more around the other side of the hotel that the bats rested in during the day and then promptly at twilight they flew off across the water….hundreds if not a couple thousand of them took to the air… remarkable! In the morning they returned and crammed themselves back into the trees for a sleep, being mindful to stay in the shade and out of sight from the hawks that circled above…!
(Hawk Medicine…’Perspective and Messenger’) 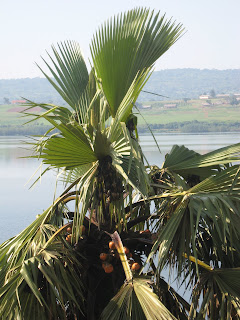 There are these fantastic rapid type falls called Bujagali Falls about 9K outside of town. I met a few young guys there who are in the habit of throwing themselves into the water (with a jerry can stuffed with leaves in the hole for a stopper that they use as a floatation device) and riding the falls for a cash donation from tourists. Having been notified in advance of this dangerous dive I took the advice of my travel book and offered a donation to the diver who approached me if he DIDN’T jump in! I remained peaceful, he was greatly amused AND lived to tell of it too! All good! 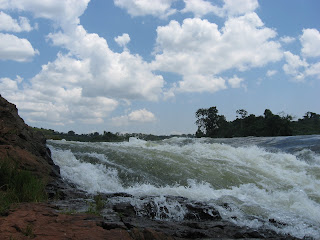 The ‘High Light’ for me in Jinja was a visit to a memorial for Mahatma Gandhi…in Uganda? you say? Well, after his death in 1948 Gandhi’s ashes were apparently divided up and sent to many locations around the world to be scattered. I feel very Blessed to have visited and communed with the location at the Source of the River Nile where some of his ashes were immersed.

Gandhi ‘Apostle Of Peace And Non-Violence’ is a remarkable teacher for me. 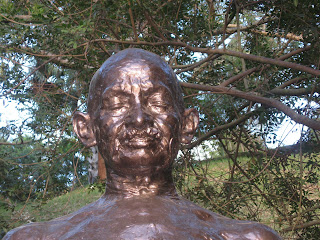 I particularly feel specially connected with him this year! This past April on the morning of my 50th birthday, I awoke to decorations and inspirational sayings all around my home that a loving friend (Bless you…) had put up for me in the wee hours of the night. How ever moving at the time, in April I did not know that I would be here in Uganda these 6 months later, so… the experience of sitting on the shore of the River Nile pondering such things, a bronzed statue of Mahatma over my shoulder, his energy and memory all around, was surely full of deep meaning and inspiration for me…I could almost hear his wonderful voice saying… 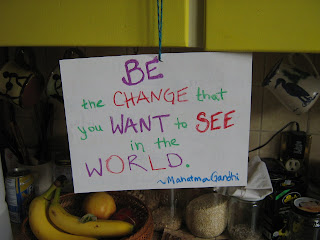