Only LOVE Prevails
-CK
LOVE conquers all
-TWK
Being LOVED deeply by someone gives you strength, while LOVING someone deeply gives you courage
- LauTzu
LOVE is patient. LOVE is kind. It always protects, always trusts, always hopes, always perseveres.
- Holy Bible
Where there is LOVE, there is life
- Mahatma Gandhi
I have decided to stick to LOVE. Hate is too great a burden to bear
- Martin Luther King Jr.
Be the reason someone feels LOVED and believes in the goodness in people
- Roy T. Bennett
LOVE everyone, everywhere
- TWK
LOVE doesn’t just sit there like a stone. it has to be made, like bread, remade all the time, made new.
- Ursula K. Le Guin
And in the end, the LOVE you take is equal to the LOVE you make
- The Beatles
I LOVE you like a fish LOVES water
- Martha
When the power of LOVE overcomes the LOVE of power, the world will know peace
- Jimi Hendrix
One LOVE, one heart, one destiny
-- Bob Marley
Who, being Loved, is poor?
- Oscar Wilde
“How do you spell LOVE” asked Piglet. “You don’t spell LOVE, you feel it”, answered Pooh.
-
Moving beyond a civilization of greed, to a civilization of LOVE
- TWK
LOVE cannot remain by itself - it has no meaning. LOVE has to be put into action, and that action is service.
- Mother Teresa
Kindness is the language which the deaf can hear and the blind can see.
- Mark Twain
Smile, breathe and go slowly.
- Thich Nhat Hanh
A bit of fragrance always clings to the hand that gives roses.
- Chinese Proverb
'What day is it?' 'It's today,' squeaked Piglet. 'My favorite day,' said Pooh.
- A.A. Milne

UPDATE IN PROGRESS
UPDATE JUNE 2010 ~ I have recently received from Vincent the following pages of information confirming money grams sent to him for ACIO Child Care Center. In this report, Vincent details the allocation of all funds received in 2009 and to date in 2010. Great work Vincent! Thank you for such a thorough report.
NB – All funds/expenses in Vincent’s report are quoted in Ugandan shillings. And of course the exchange rate has varied over time. My records show the Canadian dollar value of all the money grams sent to Uganda for ACIO Child Care Center during the time frame noted total $8,777 or as Vincent shows 12,605,750 UGX. 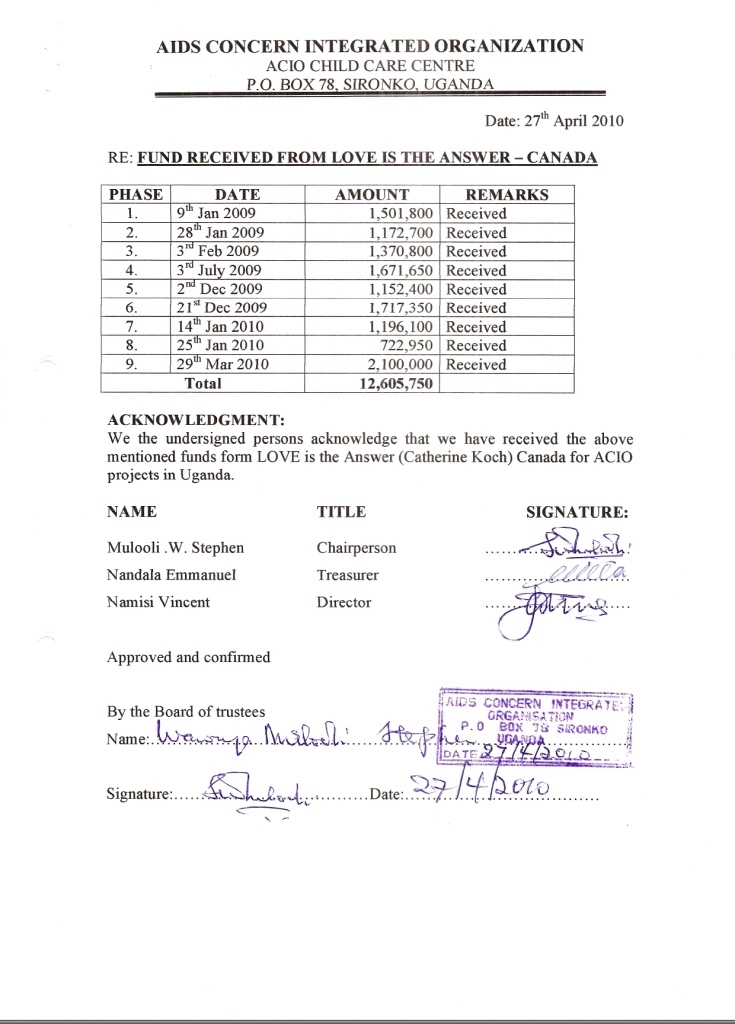 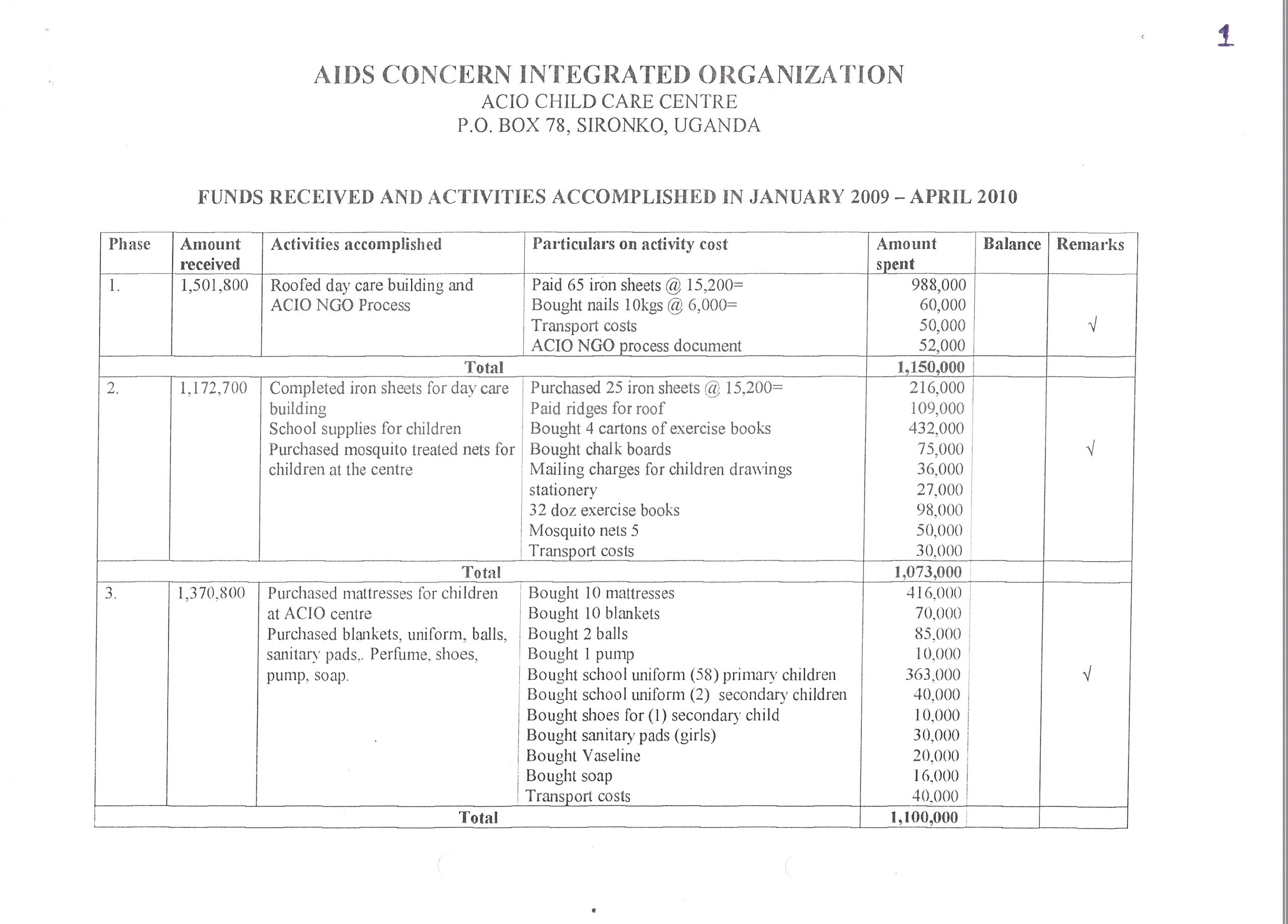 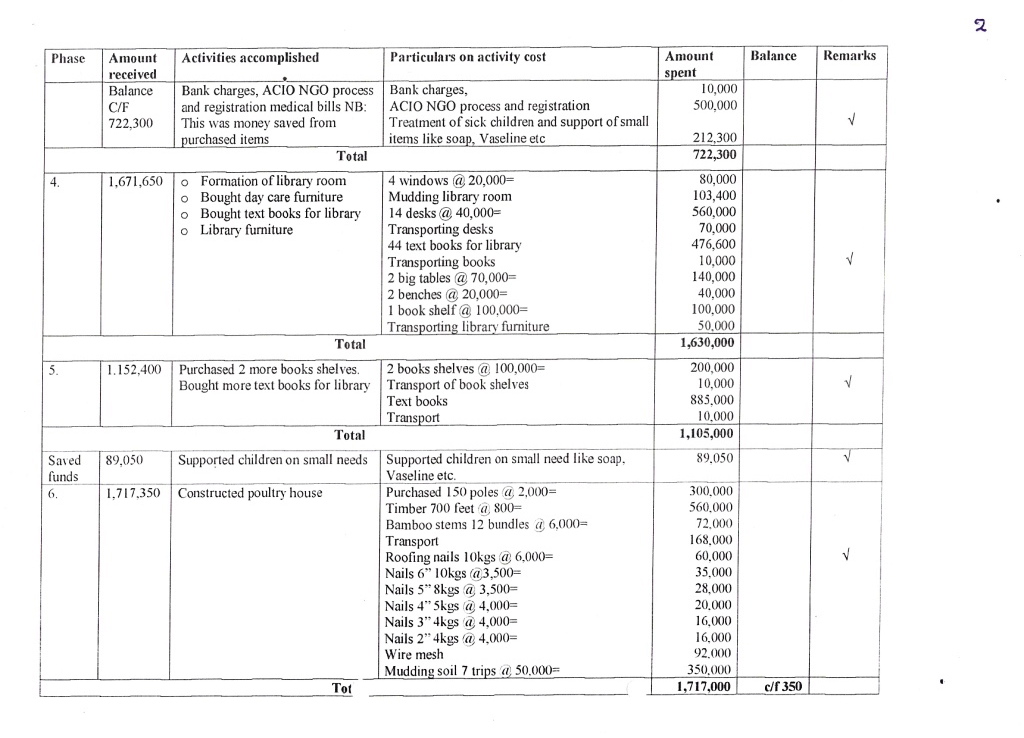 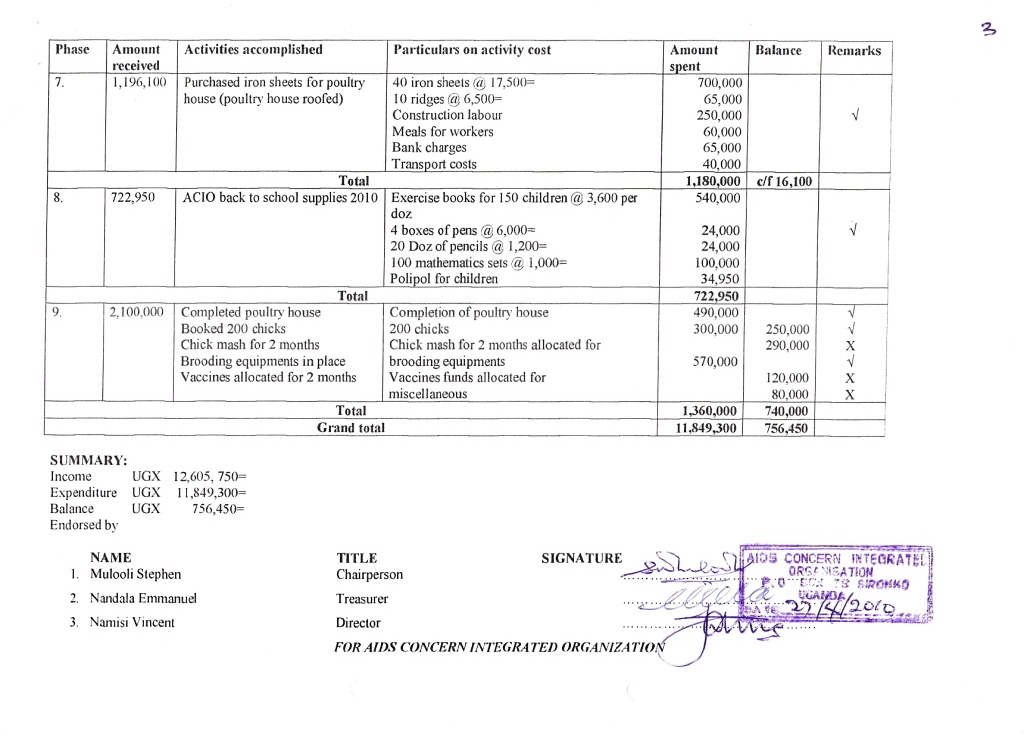 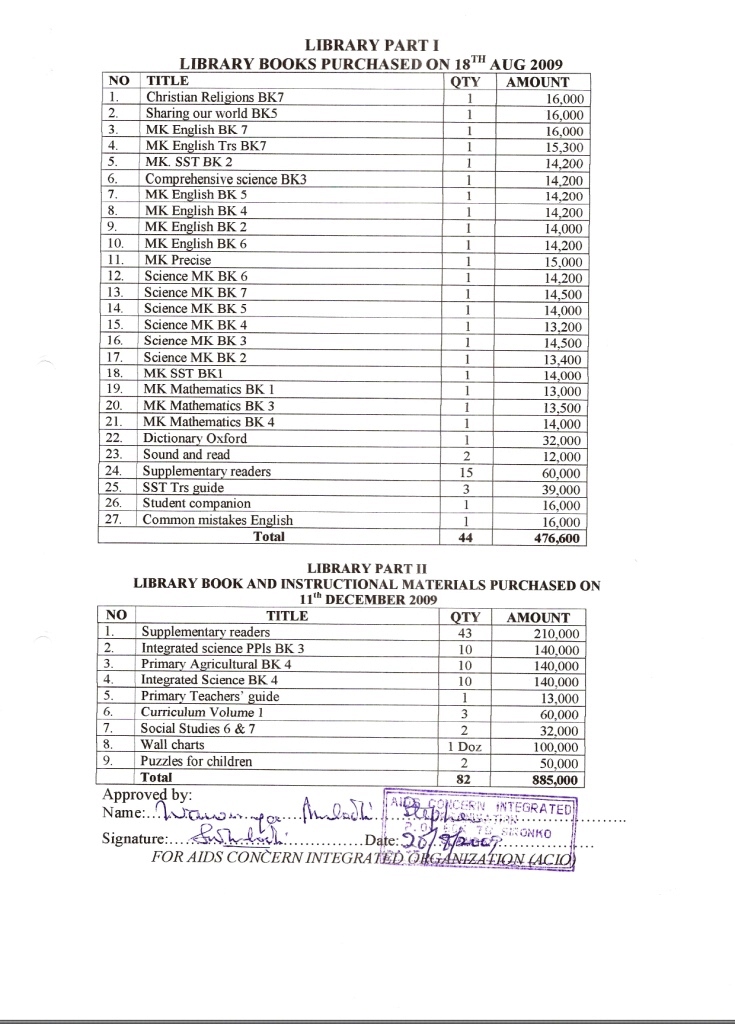 To:
The Principal and Staff
Vancouver College
Canada.

Re:  APPRECIATION FOR SUPPORT GIVEN TO ACIO CHILD CARE CENTRE

On behalf of ACIO management committee, ACIO children and on my own behalf, I extend our thanks to Vancouver College for the great support they offered to ACIO project. Thank you for providing us a motorcycle which has caused great improvement on transportation issues. This motorcycle has solved a very big problem of transport. All the past years I have been using a bicycle as means of transport and yet the geographical features of Sironko are mountainous. Most of ACIO beneficiaries are in the hills where bicycles cannot reach. This motorcycle is great value because I am now able to reach in these mountainous areas.

The Day Care and the library are in place. Children are enjoying reading books in the library room.

Thank you for assisting us in these developments. In Uganda most of the children in rural schools perform poorly in academics due to poor reading culture.

ACIO library is of great importance to the children at the centre and the community around.

On every week end days ( ie ) Saturday we conduct studies with the children around in communities. This has helped children to develop good reading culture because they are able to access reading materials.

Desks in the Day care are not enough so at times some children sit on dusty floor. Catherine and other friends did good joy in providing mattresses, blankets, mosquito nets etc. Children have really appreciated because they see change in their lives. Except of a challenge of beds.

We are looking forward to initiating an income generating activity ( IGA ) of poultry keeping. This will generate funds to meet the needs of children ( ie ) feeding, clothing, medical care etc.

Any support toward this IGA will be highly appreciated.

Take our greetngs to all children in Vancouver College and tell them we really love them.

We pray that ACIO and Vancouver relationships keep on strengthening.

Message From The Executive Director 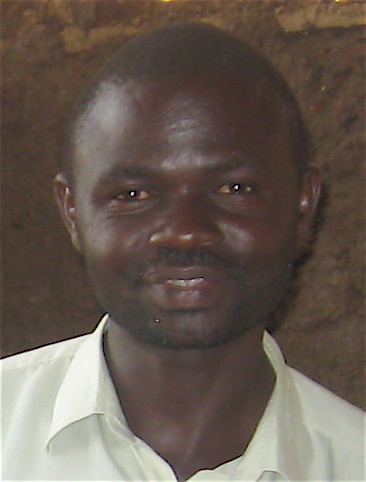 This is ACIO Developmental Report for 2008/2009. This is the best testimonial that ACIO can use to show that it is alive and well growing stronger everyday.

The ACIO family comprises of Board of Trustees, Care Givers, Volunteers, Orphans, Vulnerable Children and Development Partners ( Love is the Answer ) Canada. Who have worked hard to see that ACIO progresses to this level.

The Orphans and Vulnerable Children we serve today lost their parents due to HIV/AIDS scourge.

ACIO takes special efforts to continue advocating for the rights of Orphans and Vulnerable Children to access support in education and their well being.

ACIO also creates awareness in the fight against HIV/AIDS pandemic which has resulted in increased number of Orphans in the Country.

In October 2007, we were privileged to host Catherine Koch from Canada Vancouver who paid a special visit to ACIO Orphanage Center.

Catherine has greatly contributed much in the development of the Organisation as you will obeserve in this developmental report.

* ACIO is a Community Initiative hence the vision of supporting and caring for Orphans and Vulnerable Children came from Community Members who saw the challenges Children face in Communities.

* I thank all Members who have contributed generously towards these developments.

* I extend our thanks to children in Vancouver Colege and their teachers for the support they offered to ACIO Child Care Orphanage Center.

* I also thank the families in Vancouver – Canada for the love they have demonstrated to Ugandan Children.

The Acio Developmental Report under the Action Plan 2008/2009 has detailed activities undertaken during 2008-2009 and highlights some of the challenges encountered, successes scored and lessons learnt.

Since this was the first year of new strategic period, it was very busy indeed with a lot of activites happening simultaneously.

We also provide counseling services to the affected and infected families hence caregivers are given skills and knowledge on HIV/AIDS home based management.

As we have been carrying out community activities we realized many Orphaned Children in the District. We have identified about 430 Orphans who we collected and filled in the administrative file. Out of these, 60 children were selected to be at the center where they have been provided with shelter and other basic needs. ACIO has been working together with the community in raising support for these Children more especially feeding. Love is the Answer provided scholastic materials, mattresses, uniforms, day care furnitire and library equipment for the smooth running of the center.

ACIO was pleased to be associated with efforts to improve the well being of orphans and Vulnerable children throught the resources allocated to them by Love is the Answer Canada.

ACIO acknowledges and appreciates all the efforts given by members, staff, friends and partners. 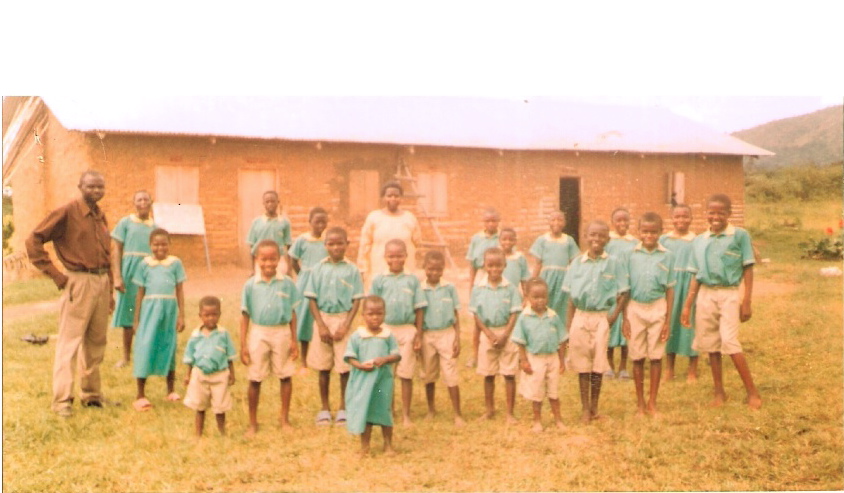 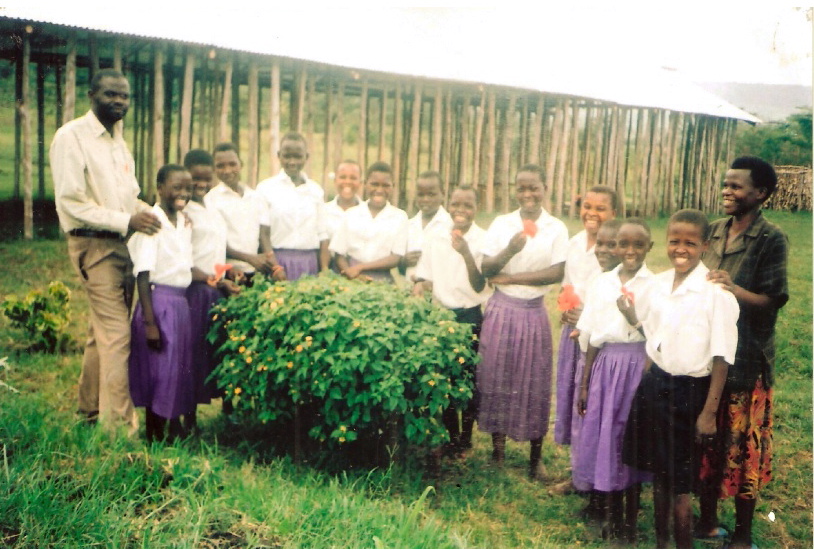 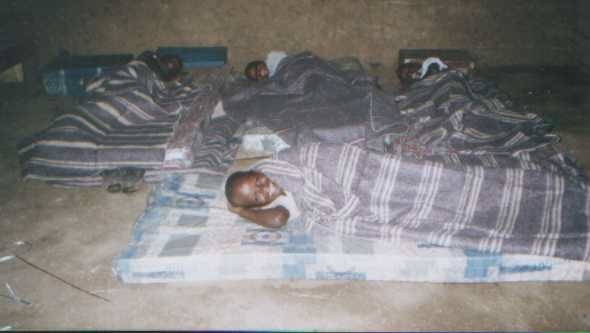 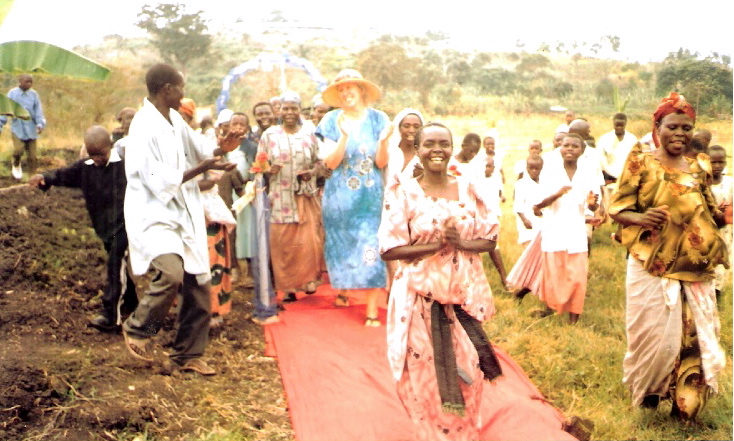 * Some of the challenges with regard to child support programmes include dealings with the visible pains of needy orphans who are homeless and child headed families.

* Because of inadequate resources we can not afford to provide enough support to them.

* Most of the Children sleep on the floor. They have no beds and the mattresses and blankets they have are not enough.

* The project has a vision for the School to equip these children with skills and knowledge but we have limited resources to construct one.

In conclusion ACIO continues to provide all the necessary supprt to Orphans and Vulnerable Children. We continue calling upon members national and international to come on board and support this Vision financially for the betterment of these needy children.

ACIO is indeed grateful for all the support it received from friends, members and Development Partners for the continued solidarity in the fight against HIV/AIDS in Uganda. 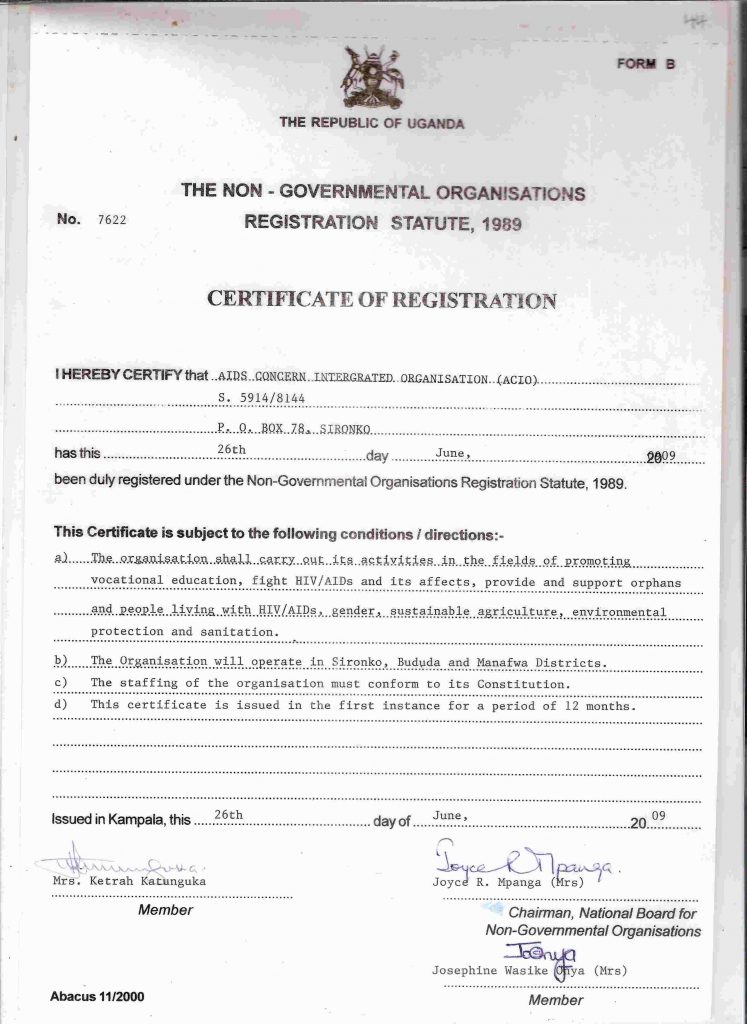 RE:     ACKNOWLEDGMENT OF DONATIONS RECEIVED FROM STUDENTS OF VANCOUVER COLLEGE

On behalf of ACIO orphans and on my own behalf, we acknowledge the support given to ACIO children. We thank the Vancouver College students for the great love and caring heart they have shown to their fellow children in Uganda.

The donation helped ACIO children in buying mattreses, blankets and mosquito treated nets. Children are sleeping comfortably and they have joy in their lives.

We extend our thanks to “Love is the answer” Mammy Catherine Koch who linked ACIO orphanage center with Vancouver college.

In Uganda reading and writing is a challenge to the young children but I believe that this partnership of ACIO and Vancouver will help us to over come these challenges.

We shall share educational experiences of Canada with those of Uganda.

We encourage our partnership to continue so that one day Vancouver students will have exchange visit with those in Uganda.

Uganda is mountainous country which has many rivers, lakes and falls. ACIO is found in the slopes of Mt. Elgon. We are on the way to Mr. Elgon and Sipi falls which have got interesting sceneries.

Wishing you best regards and hoping to hear from you soon,

BC Catholic Article on Cath/LITA

Copyright © 2023. Love is the Answer. All rights reserved.