Only LOVE Prevails
-CK
LOVE conquers all
-TWK
Being LOVED deeply by someone gives you strength, while LOVING someone deeply gives you courage
- LauTzu
LOVE is patient. LOVE is kind. It always protects, always trusts, always hopes, always perseveres.
- Holy Bible
Where there is LOVE, there is life
- Mahatma Gandhi
I have decided to stick to LOVE. Hate is too great a burden to bear
- Martin Luther King Jr.
Be the reason someone feels LOVED and believes in the goodness in people
- Roy T. Bennett
LOVE everyone, everywhere
- TWK
LOVE doesn’t just sit there like a stone. it has to be made, like bread, remade all the time, made new.
- Ursula K. Le Guin
And in the end, the LOVE you take is equal to the LOVE you make
- The Beatles
I LOVE you like a fish LOVES water
- Martha
When the power of LOVE overcomes the LOVE of power, the world will know peace
- Jimi Hendrix
One LOVE, one heart, one destiny
-- Bob Marley
Who, being Loved, is poor?
- Oscar Wilde
“How do you spell LOVE” asked Piglet. “You don’t spell LOVE, you feel it”, answered Pooh.
-
Moving beyond a civilization of greed, to a civilization of LOVE
- TWK
LOVE cannot remain by itself - it has no meaning. LOVE has to be put into action, and that action is service.
- Mother Teresa
Kindness is the language which the deaf can hear and the blind can see.
- Mark Twain
Smile, breathe and go slowly.
- Thich Nhat Hanh
A bit of fragrance always clings to the hand that gives roses.
- Chinese Proverb
'What day is it?' 'It's today,' squeaked Piglet. 'My favorite day,' said Pooh.
- A.A. Milne 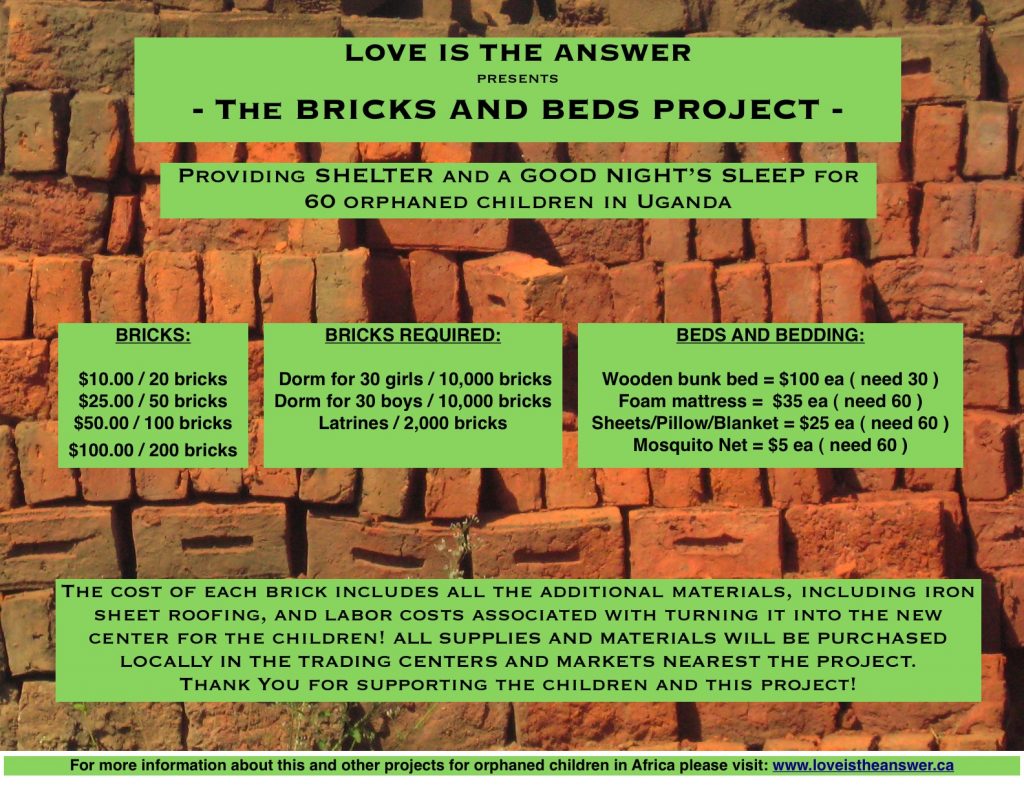 BRICKS AND BEDS PROJECT – Until May 2010, 60 orphaned children were living in full time care at ACIO Child Care Center in Sironko, Uganda.. a center Love Is The Answer had helped the community develop since 2007. There, the children were being cared for by ACIO volunteers and housed in temporary mud and stick buildings built on ACIO land.

Due to heavy rains that began in Uganda in March 2010, mudslides in neighboring communities to the Child Care Center killed hundreds, and flooding caused thousands to have to leave their homes and villages. While all the ACIO children were kept safe, the Child Care Center, located on low land in a valley, became very water logged resulting in flooding of the children’s weathered dorms and collapse of the latrines, and it became necessary to relocate the children to safer accommodation.

Since that time, 30 of the resident children were taken in by caregivers in the community – many with several orphans already in their care – where they will stay for the next months while ACIO works on alternate accommodation for them. The remaining 30 children were relocated to a rented home in Vincent’s village and are being cared for by him, his wife and other volunteers for the time being. The daycare at the former center – an income generating activity for ACIO – was also closed due to the flooding. All of the fixtures, supplies and items like desks, benches, blackboards, and the library have been moved to storage and the first 200 chicks for the ACIO Poultry Project that arrived in early June went to a temporary location where they remain to this day.

Seeing the great need that’s developed, a local man in Sironko has stepped up and donated an acre and a half of land on higher ground in Vincent’s village, and it is on this land that ACIO is planning to relocate and build the new Child Care Center. It is planned that it shall be built in the local style, out of baked bricks and concrete, with iron sheets as roofing, as opposed to the traditional, temporary, less expensive building style of mud and sticks we had used at the former center. ACIO will be attempting to re-use many of the iron sheets used for the roofing at the former center, as well as the doors, windows, roof trusses, etc.

One day soon, as accumulated funds and circumstances on the ground dictate, we will commence building the first phase at the new site. This phase will include new dorms and latrines for the children and an admin bldg.. then we’ll move on to a cooking and dining area, staff’s quarters.. eventually there are also plans to build a primary school/vocational training building, and bring the existing poultry project up to the new land, and add heifers as well! Lots of dreams and plans are in the works! Thanks for adding your energy and support to them! 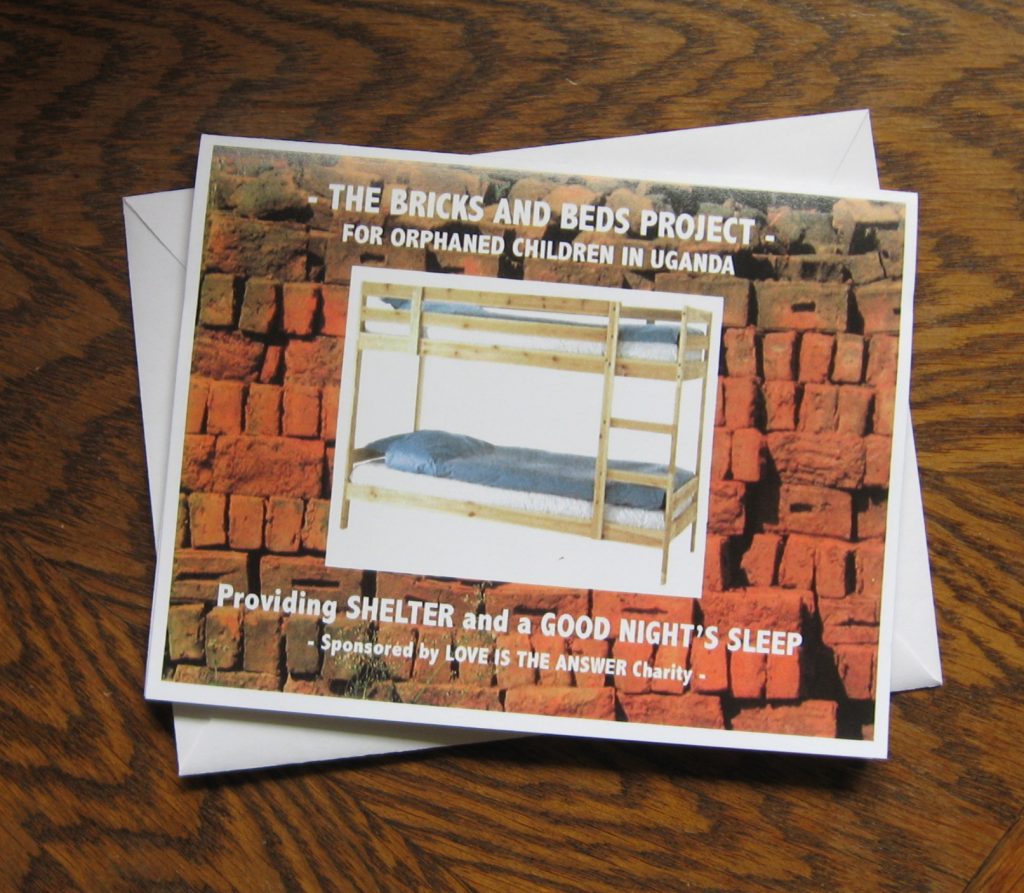 GIFT CARDS are available if you would like to sponsor BRICKS/BEDS for the child care center in the name of a family member or friend. Please request your card(s) when you make your donation and we will get them in the mail to you along with your tax receipt, asap! Thanks so much!

Thank you very much for supporting this project!

CHILD FAMILIES – June 2010 ~ This past January before the new year of school was set to begin in early Feb, a friend in Mbale traveled to visit Betty and her brothers. Through him I learned the awesome news that all 3 boys, Moses, Morning and Peter had passed into the next grade of school, namely 7, 6 and 5 ( stunning achievements on the part of the boys, not easily accomplished, you can imagine, by children in child headed families… ). He said they were eager and very happy to get organized to return to classes for this next year of school.

I sent funds by money gram to support the boys with new uniforms and school supplies, including text books for Moses going into P7, (the other boys have the previous years books to pass down to one another) as well as extra money for the boys to begin a small poultry business as an income generating activity.

Betty was not at the property the times my friend recently visited and I have yet to hear definitive news about her, her business, Rose and Stella, and the Auntie living at the compound with her many children. My friend was made aware that there are issues that have arisen regarding the ownership of the children’s land. At this time, I am awaiting news about a clan meeting that has been arranged by the village elders at which ( I am hoping ) the children’s ownership of the land will be confirmed ( I was told when I was with the children that when their parent’s died and left no will, the clan leaders voted and secured the land in the children’s name ) and any relatives looking to usurp it from the children shall be stopped. More on this as I am informed…

My friend also went to visit with Gideon’s family in January and see what everyone’s plans were for the new school year. When he arrived at the compound, he found only Naume, one of Gideon’s sister’s there. Gideon, she told him, had been enrolled by his extended family and was away at a trade school, and Martha, Gideon’s other sister, had been sent to work as a housekeeper/nanny for extended family. Neither Martha nor Naume were continuing on with their schooling this year because they have failed P6, Grade 6, 2 years in a row, most likely due to many responsibilities for, and little support from, their extended families.

BC Catholic Article on Cath/LITA

Copyright © 2023. Love is the Answer. All rights reserved.